An artistic collective with Pijin Neji (dancer and founder of “neji&co.” – bornin 1980), Ai Mieda (artist – born in 1991) and Taisuke Shimanuki (writer and editor – born in 1980). Neji’s performance has its basis in the embodiment fostered by Butoh. Mieda’s art work seeks for a means of re-connecting us with the forgotten objects through the historical trail and the concreteness of them. By intertwining both, the collective pursues a new creation in both forms of performance and exhibition. Recent works by the members of the collective include, “City III” (Kyoto Art Center, January 2019) directed and performed by Neji, where Mieda contributed with the art works and as a performer, and Noriyuki Kiguchi’s solo exhibition“ Off the Dramatic Passions” (Kanzan Gallery, July 2016) curated by Shimanuki, where Neji contributed with the performance of the same title as the exhibition. 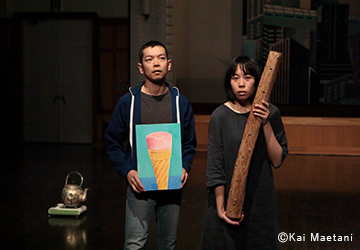