International collaboration project among Seinendan, Korea National University of Arts and L'Académie de l'Union - Ecole Supérieure Professionnelle du Théâtre du Limousin. The three performances will be worked on simultaneously during the residency from May 15th to June 19th. Both works will be performed at Shikoku Gakuin University(in June) and , Komaba Agora Theater(in July) and they will tour in Korea and France.


❶“The Scientifically Minded” : At a biology laboratory of some national university, where they are researching for making monkeys evolve into humans. While they talk about genetic manipulation and molecular chemistry, the relationships among them evolve with love, getting employed, failed suicide attempt for lost love and getting married. Premiered in 1990, this work depicted the modern young people, and now it will be reworked for a graduation performance of Ecole SUPÉRIEURE professionnelle de THÉÂTRE du Limousin, which would vividly portray the group of young people in the contemporary French society.

❷“In the Heart of a Forest”: The newest work of Oriza Hirata, set in the imaginary French national laboratory of primates in Madagascar. The actors from the three countries Japan, Korea and France will perform.

■Reservation
Please contact the number or email address below and be sure to give us the title of the event, your name, the number of people attending, and your contact information.
Kinosaki International Arts Center
TEL 0796-32-3888 (From 9am to 5pm. Closed on Tuesdays)
e-mail info@kiac.jp 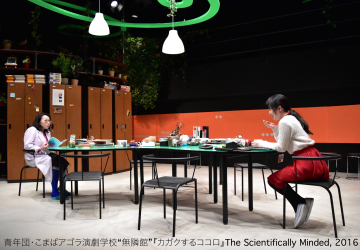 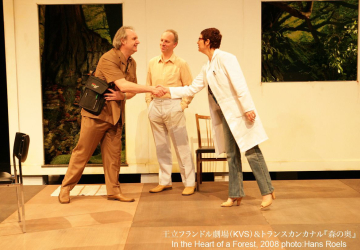