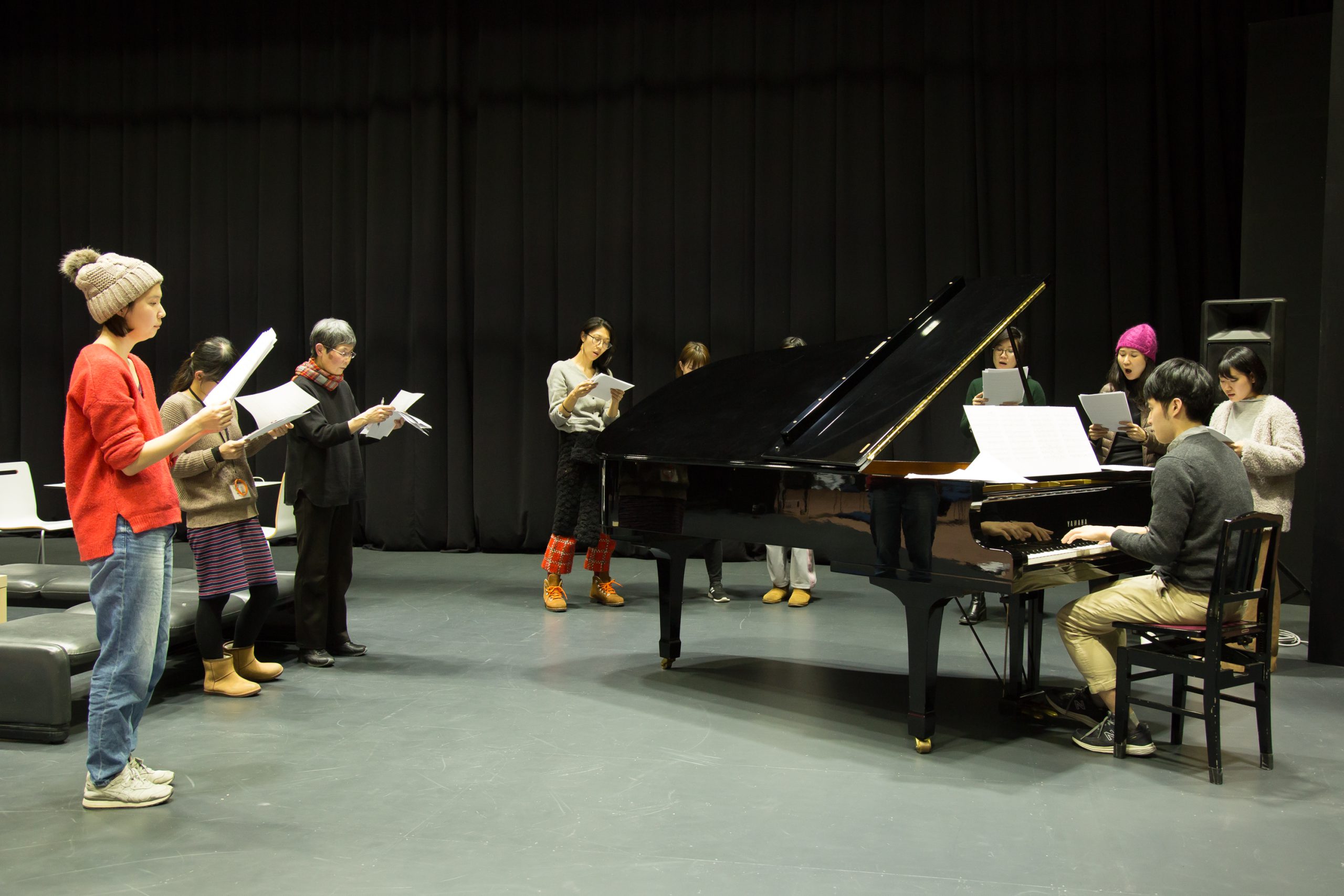 
This is a part of the lyrics of the chorus sung in the workshops. No one would cry by reading this text. However, once melodies are set and overlapped female voices create beautiful harmonies, it just moves people without any logic. One of the workshop participants was crying after singing this part, saying “what a great song”. Honestly, I thought, “No way”. But even at the performance at Aichi Triennale, I saw some people crying in the audience. And in secret, I also cried during the performance. The effect of music is incredible. The founder of the company Bird Park, Ms. Nishio was at residency at the same time with us, and after participating in the workshop, she said something like “the output like this is comforting, though the text is rather tough”. Indeed. It’s a great way to encounter text. Plus, oftentimes, workshops don’t have a clear goal to start with. That’s what makes them enriching, but it can be difficult as well. However, this time, the goal was so clear. A composed song is kind of a goal, so we sing. In the act of singing, there is joy. Many people pay to go to karaoke, to sing. I felt the richness that dwells in the human voice. Some participants were the elderly, and they have this indescribable sound to their singing voice. Even at the high notes, they are round and soft. It’s impossible to imitate, even if I want to.
I held several workshops regularly, and we talked a little with some tea and snacks after singing. “I sang while I was doing housework.” “I was singing in the car on my way here.” I was happy to hear that, to feel that the work has been absorbed in their lives.
At the end, as the final presentation of the residency, we have run through the acting of the performers and singing by the workshop participants at the hall in Kinosaki International Arts Center. When it was finished, a woman in her 60s said, “I thought that I didn’t understand the work of Ms. Ichihara because I’m only a rural elderly woman, but I felt like I understood something when I actually sang.” This remained in my heart. The consciousness as “a rural elderly woman” is linked with the phrase “I don’t understand”. Until then, I had always talked to those who were used to watch theatrical performances. More than I think, my works make someone think “I don’t understand”. Still, at last, even she said “I felt like I understood”. That is a fruit of the time I spent together with her. As an author, it is certainly important to create works that pose questions to the society, but I realized that I should put more effort in making people interested in my work and in making people feel closer to them. After the performance at Aichi Triennale, at the lobby, a college student who had participated in the workshops saw the performance and told me, “I sang together in my mind”. I wanted the workshop participants to watch the completed work, so I was really happy that one of them has made it. She could have sung out loud, not only in her mind.

Satoko Ichihara
Playwright, director. She writes and directs plays that deal with human behavior, the physiology of the body, and the unease surrounding these themes, using her unique sense of language and physical sensitivity. In 2011, Ichihara received the Aichi Arts Foundation Drama Award with the play Insects. In 2017, she was nominated as one of the finalists of the 61st Kishida Kunio Playwriting Prize for Favonia ’s Fruitless Fable. The most recent work The Bacchae — Holstein Milk Cows was premiered at Aichi Triennale 2019 and is scheduled to be presented at Theater der Welt in Germany in 2020. Junior Fellow Artist of the Saison Foundation.